It’s Foodie Friday and even though it’s November, it’s also Masters weekend. For any golf fan, The Masters Tournament is one of the highlights of the year and since we had to wait an additional 7 months for it this year, it’s even more special. While it’s always been a harbinger of Spring and the golf season to come, this year it’s wrapping up the year and it’s very different. No azaleas, no patrons (fans, to you), and, I’m told, none of the food that makes the Masters experience so unique.

If you’ve never been, this event is unique for many reasons. The biggest unique thing is that it is exceptionally fan-friendly when it comes to food. You see, the folks who put this tournament on are really not all that interested in making a ton of money off of their patrons. Unlike, say, the US Open Tennis, where a sandwich will set you back close to $20, a sandwich here costs $1.50. Not a typo, and the egg salad and the pimento cheese sandwiches are the stuff of legend. The sausage biscuit you’d pay $4 at Bojangles is also $1.50.

Ask any fan who has attended the tournament and I’m willing to bet you that they’ll mention the food, maybe even before they talk about the golf. A Georgia Peach Ice Cream Sandwich ($2) is so good that folks have been known to smuggle dry ice onto the grounds to take several home with them.

What makes the food so good? Well, first, it’s very simple. No fancy burgers. The most expensive food item is the $4 Bar-B-Que (that’s how it’s listed) sandwich. It’s not great barbecue but it’s still pretty tasty. Egg salad, pimento cheese, turkey clubs, and a chicken sandwich – all very basic. You could make everything they serve at home quite easily. The difference is it’s all really good, and because it doesn’t cost a month’s rent, I think whatever small shortcomings there might be are overlooked. You can buy the entire menu for the price of the fancy burgers sold at many places and several beers here for the price of one at any stadium. It’s simple and it’s great.

It’s a good lesson for any of us in business. Consumers are looking for great value (Walmart’s house brand is called that for a reason!) and when the product is not only a decent price but also is really good, you’ve got a winner. This food solves the “I’m hungry” problem exceptionally well. We all need to identify the problem we’re solving and do so better than anyone else. If we can do it at a great price, it’s game over.

I’ll make pimento cheese to watch the tournament and maybe some egg salad too. It’s won’t be the same as being in Augusta and maybe not as good (food always tastes better at the game, don’t you think?). It will remind me that The Masters is my favorite golf tournament for more reasons than the golf. How can you have your customers thinking that way about you?

I haven’t bored you with a golf-related screed in a while so let’s try that today. Yes, it relates to business too, of course. As I generally do over the weekend, I played golf. If you’ve been a reader for any amount of time you know that I find a great number of life lessons (and business lessons) on the links. Of course, given how badly I played the last few rounds, the only learning of which I became convinced was that I was really terrible at this game.

This morning, with my head a little more clear I went to the driving range. For those of you who are golfers, I thought that my problem was that I needed to shallow out (make a little flatter) my swing because I was digging very deep divots and not striking the ball particularly well. From time to time, especially when I was off the fairway (it happens), I was spraying the ball right because I couldn’t get the clubface back to square due, I thought, to the steepness of my swing.

None of that technical stuff matters, however. I had diagnosed the issue and thought I knew the answer so I went to the range to make a swing change. As with anything, big changes take time and I wanted to get going. You with me so far?

Well, as I was warming up to begin practice, an odd thing happened. I hit a ball with it positioned farther forward (think closer to my left foot) in my stance. The result was an absolutely pure shot – straight, high, and far. No real divot either, just a nice scrape along the ground. I tried it again – the same result. OMG – I don’t stink – the ball was just too far back (toward my right foot) in my stance and I had to come at it too steeply to hit it. With it forward everything else was fine. The club pro was on the range giving a lesson and he wandered over when he was done. He confirmed my swing looked pretty good. and that yes, something as simple as moving the ball forward 3 inches could change everything. Which is, of course, the business point.

How many times have things not been going well and someone – the boss, the management team, maybe you – rants that wholesale changes are needed? This usually starts a chain of events that paralyzes the enterprise. Here is the thing – it’s rare that a business loses its mojo overnight. It’s usually a gradual process of tiny changes, much like me having the ball slide further back in my stance little by little until I became used to playing it too far back which was making it difficult to play well. Businesses let things “slide back” too until they can’t operate well.

Much like my fix, it’s rare that major changes are needed in a business. It’s usually just a matter of paying attention to what had become different over time. It may require some outside eyes to help with that, but usually, the folks with good institutional memory can provide answers (yet another reason why you don’t get rid of all us older employees!).

Wholesale swing changes? Nah – just a tweak in ball position. Think about that the next time you’re contemplating a major change in your business. Yes, that might be needed but isn’t starting with some simple changes much easier and cost-effective?

I like walking the golf course with a caddie. I really don’t get to do so much anymore since not a lot of places employ caddies. Even rarer are the places that employ professional caddies (as opposed to some kid who will carry your bag but knows less about the course and golf than you do). 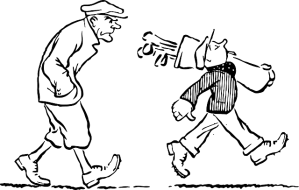 I was thinking about the differences a professional caddie can make and it dawned on me that some of the things I appreciate most about good caddies are the same things that can help transform a good business into a great business. Ironically, those things don’t include what is often cited as the caddie’s three jobs: show up, keep up and shut up. There are, however, a number of other things I’d like to point out.

First, great caddies are available. What I mean by that is that they keep up with you and are by your side when you need them to be. They also leave you alone when you don’t need them, as you chat with your golfing companions. Great businesses are available as well. You can reach someone 24/7, even if it’s only to get told “we hear you and someone will get back to you by 9am” and their website information is up to date and complete. Great businesses let you know they are available and they hear you.

A caddie is an epitome of combining service and convenience. That’s what your business needs to do as well. The convenience of someone buying online and the service of going to pick up the order at a special desk at your local retail outlet does that (and saves shipping charges as well as time).

Caddies are proactive. They have the right yardage figured out when you get to the ball and they hand you the right club for the shot. By the way, great caddies give you the club you need, not necessarily the club you want. After a few shots, they’re pretty good at assessing your game and understanding the best way to help you have a great round. Great businesses are the same – they’re proactive. They know their customers and have what they want before they ask for it.

Finally, the best caddies are fun people. They’re great to talk with, generally have a decent joke or two to tell, and help you to focus on your task at hand. They make it easy to have the best experience possible. Isn’t that exactly what great businesses do as well?