Something Could Be Gaining

I was watching TV last night and on came a commercial break. There were 5 commercials in this pod along with a couple of promo spots for the network I was watching. When the pod was over, something dawned on me and that has prompted today’s thought.

There was an online realtor who would buy or sell you a house without using a local agent. There was the online employment site that would find you a job and serve as your headhunter. There was a site that would pack your pills into individual doses and mail them to you, no trip to the pharmacists needed. The next company would book your next vacation and notify you if now was not the optimal time to book.

I wonder, a decade ago, if the pharmacists thought that they would be threatened by a company that could fill prescriptions in a way no drug store could and at prices that are reflective of their no physical outlet cost structure? Why bother going on interviews with headhunters when you can post your resume and let the algorithm find you interested employers? Why spend on a recruiter when you can have candidates screened electronically and only see the best?

Satchel Paige is quoted as reminding us “Don’t look back. Something might be gaining on you.” I think that’s optimistic. If you are in any business these days, something IS gaining on you and they may be the advertisers whose commercials you watch as they go by. Disruption is a fact of business life and unless you’re thinking about how your business could be replaced, you’re missing the boat.

You’re On Your Own

A decade has passed since I last held a “real” job. My kids call the work I do now “Daddy’s Phony Baloney Made Up Job” but hey, it pays the bills so what can I say? 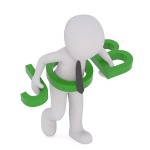 I didn’t realize when I left corporate life 10 years ago that I was actually beginning to ride a wave that continues to grow. I had joined the gig economy. What’s that? A gig economy is an environment in which temporary positions are common and companies sign up independent workers for short-term engagements. Companies don’t have “employees”, they have consultants or contractors. Think Uber – every driver works for themselves. Rather than a corporation of thousands, we have a thousand corporations of one.

According to Intuit, by 2020, 40 percent of American workers will be independent contractors. It’s liberating in some ways and incredibly stressful in others. No guaranteed paycheck. No paid-for healthcare or other benefits. You can set your own schedule and work as you choose but you have to go find that work. I mean, unless you’re a pro, playing a lot of golf doesn’t pay the bills.

We’ve become a society where we’re on our own. Putting aside what may be happening with small social safety net we do have here (no politics, please!), many more people are going through their daily lives without the safety net a “real” job provides, and many of the full-time jobs that are out there pay wages that haven’t increased in years because the demand for the shrinking number of jobs is still high. We have seen the growth of businesses and services that support individuals rather than corporations. Sites that help you find gigs (as opposed to full-time employment) are plentiful although in many cases they become places where it’s a race to the bottom with respect to what you can get paid.

What strikes me is that I struggled in many ways to get my business on a good track despite many years of business experience, having managed dozens of people, and being responsible for a multi-million dollar P&L. I often wonder how many kids starting out in this economy are going to struggle and fail without any sort of mentoring. I don’t mean the relatively easy stuff such as how to keep a proper set of books so you don’t have tax issues. I wonder about the hard stuff that involves learning how to formulate ideas and how to express them. It’s the stuff that we don’t learn in school that forms our business education (and that means you too, MBA’s). It’s hard to get that while you’re on your own.

This trend of being on your own is going to continue and to grow as more companies downsize and robots of some sort begin to perform tasks once performed by humans. Who is going to program and service those robots? Independent contractors, no doubt. Maybe you?