It’s Foodie Friday which means that tomorrow and Sunday are football days. Yes, I’m aware that games are played on damn near every night now, but traditionalist that I am, Saturday is for college and Sunday is for the NFL. 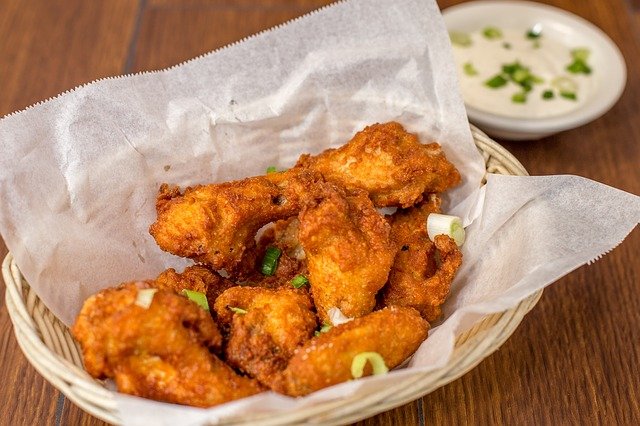 Of course, any serious fan has to watch with a beverage and some sort of snack food. I try to avoid snacks that come premade and prefer to make them myself. Dips are big (I’ve got a bacon cheese dip that’s become the go-to) as are poppers (cheese stuffed jalapenos wrapped in bacon – are you starting to see a pattern?). It’s not a Michigan game without weenies (pigs in a blanket or whatever you call them) but the real snacking centerpiece is a fresh pile of chicken wings.

I sometimes wonder if chickens had wings before the 1960s. Other than using them in stock, I think cooks mostly discarded them. In the mid-1960s, a bar in Buffalo began selling the first of what we now consider to be the prototypical wing – unbreaded, fried, and dosed in hot sauce, maybe with butter, maybe not. Since then, entire restaurant chains have been founded on chicken wings and it’s hard to find a bar that doesn’t serve them.

My local favorite wing place offers many different types. Their garlic-Parmesan wings are killer. They are but one of a dozen types they serve, ranging from mild to fiery, doused in a sauce to dry-rubbed, and Korean-flavored, teriyaki, and other global flavors. Which of course got me thinking.

The underlying wing is the same (I don’t classify “boneless” wings, which are really strips of breast meat, as wings). Even the preparation is pretty ubiquitous. They must be very dry (use baking soda in the seasoning and air dry them for a bit before cooking). They can be fried in hot oil or baked in a hot oven with either regular heat or convection. Still, the product is basically the same until the final sauce is added.

That should be a reminder to each of us in business. Success in my mind is less dependent on coming up with new, wonderful products than it is on our ability to provide a sauce that’s better than anyone else can provide. Some of it involves customer service but it’s also your unique flavor. If everyone is doing butter and hot sauce, there’s no reason why you can’t as well since your customers probably expect that. But which hot sauce? Sure, you could be lazy and buy the pre-made “wing” sauce from your supplier, but since others are doing that too you’ve now made your wings a commodity – anyone can serve the same flavor.

We try to make the garlic-Parmesan wings here at home. The wings are every bit as crispy as the bar’s but we don’t quite get their flavor. I guess that’s why we keep going back. What are you doing to have people come back for your unique flavor?

It’s Foodie Friday! Today I’d like us to contemplate the foods that make us hungry. No, I don’t mean the ones for which we have cravings. I mean food that can actually increase your hunger when you eat them.

Have you ever wondered why bars put out salty snacks like popcorn or peanuts or pretzels? As it turns out, salt makes you thirsty and what better place to be when you’re thirsty than your favorite watering hole? Salt, according to some studies, is addictive, as is sugar and fat. The food industry has become very good at layering those things together to create products (I’m deliberately not saying “foods”) that play to our addictions, light up our dopamine centers, and cause us to engage in self-destructive behaviors. When you hear the old Lay’s slogan about “bet you can’t just eat just one,” you might try to think about what the drug pusher says as they give away their free samples to people: “don’t worry – you’ll be back.”

The screed today isn’t meant to be a lecture on improving our eating habits. Instead, there is a business point here. We don’t eat salty snacks or sugary foods or processed foods or even foods sweetened with artificial sweeteners (they made you hungry too) to get fat. We eat them to solve an immediate need – hunger. But there is any number of other options that can fill that need without triggering the problems that come from really unhealthy foods.

It’s the same in business. We often take the easiest or most available or cheapest solution to solve an immediate need. Unfortunately, those “fast food” solutions only solve the problem in the near term and can often cause long-term damage. Just as with food, we need to be aware of our cravings and think before we eat. We need to consider all of the options, not just the “fast food” ways out. We need to choose more wisely, not just more expeditiously.

I hope you all had a great Christmas holiday. It has become a tradition that I use the week between Christmas and New Year to recap the most-read posts that were written this past year. Today is the fourth most-read post. I published it last April 8 after seeing a photo of an old friend’s dad. While I have many great memories of his father, the one I wrote about is probably the most indelible. Enjoy.

My friend posted a picture of his father on social media the other day. Outside of my own father, he was probably the most influential male in my life as I was growing up in many ways. Aside from wondering why he’s aged and I haven’t as I saw the photo (that’s a joke, kids), it made me recall one thing that he did to teach my friend and me to be better baseball players: hitting curveballs.

My friend’s dad was no ordinary dad when it came to imparting that little piece of baseball knowledge either. He had tried out with the Yankees and the family lore is that had my friend’s mom not told him that she would walk on the marriage, he would have been signed and playing in Yankee Stadium. Obviously, when this guy tells you he’s going to teach you about curveballs, you listen.

For those of you that have never stood in against a pitcher with a lively curve, the pitch starts by heading at your head and breaks down and away from you. That’s what my friend’s father threw at us – pitches that started at our heads and broke in over the plate. Of course, once he felt we were getting complacent about standing in against the curve, he’d toss the odd pitch right at our heads to teach us to look for the rotation of the ball and to duck if it wasn’t going to curve. A fastball at your skull gets you focused very quickly!

Almost every player who makes the majors can hit fastballs. It’s the ones who can hit breaking pitches – sliders and curveballs – who become stars. It’s true in business as well. When things are going along according to plan and not diverging from the track they’re on, things are relatively easy to manage. Even if something appears dangerous (like a fastball heading for your ear) it’s relatively easy to get out of the way if you can see where things are heading.

Learning to hit business curveballs is something that you need to do if you’re going to elevate your game. You need to prepare for them by planning and recognizing that they’re going to show up from time to time. Your team needs to be ready, and you need to think about who can handle curveballs as you’re assembling that team.  People who are regimented and can’t deal with it when events start tracking differently are probably not your priority hires.

Mostly, you need to expect things to go wrong. After bailing out and hitting the dirt a couple of times, I realized that some attempted curveballs don’t break even when the rotation makes it look like they’re trying. It’s better to have to wash your uniform than to repair your skull. Your team needs to recognize that bailing out might be the smartest option when things begin to go awry. Watch out for those curves, learn to hit them out of the park, and your team can’t be beaten. Right?