A little science this Foodie Friday. I swear this doesn’t come from some satire site either. A group of Swiss scientists conducted a little experiment with music and cheese. The idea was to find out if exposing cheese to round-the-clock music could give it more flavor. They took 9 wheels of Emmenthal cheese and put them in individual wooden crates. Then, for the next six months, each cheese was exposed to an endless, 24-hour loop of one song using a mini-transducer, which directed the sound waves directly into the cheese wheels. You with me so far? 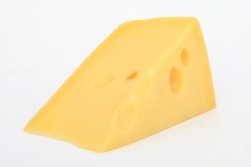 As one report had it:

The tracks include A Tribe Called Quest’s We Got it From Here, Mozart’s The Magic Flute opera, Led Zeppelin’s Stairway to Heaven, Vril’s UV, and Yello’s Monolith. Three of the other wheels were exposed to either low-, medium-, or high-frequency sound waves. One control wheel was left in silence.

Any guesses on the results? Well, amazingly, there was a noticeable difference in flavor according to the food experts who tasted them. They reported that the cheese exposed to music had a milder flavor compared to the non-musical cheese. They also found that the hip-hop cheese had a stronger aroma and stronger flavor than other samples. If you ask anyone who’s been around me whilst I’m preparing a meal, they will tell you that I often play a type of music appropriate to the cuisine being prepared: Zydeco when cooking Cajun, Salsa when cooking Mexican, etc. They think I’m crazy but now I have science to back up my thinking, right?

The business point here is that we often don’t pay enough attention to the environment we set up in our business places. While it’s become more common for people to listen to headphones while they work, there are many other factors in the environment that affect performance. Creating an environment where people are happy and motivated pays huge dividends, especially when you look at places where people are generally miserable. It’s not just good lighting and clean spaces. It’s also having an open-door policy as a manager and allowing the staff to personalize their spaces. It means bending the rules from time to time to accommodate special situations and doing a lot more listening than talking when conversing with your team.

If cheese can pick vibrations and react, you can be very sure that the people with whom you work can as well. Why not make them the kind of vibes that create the best flavor?