I Am Not A Crook

Ben Bradlee died yesterday. For anyone who lived through the Watergate era I think it’s impossible not to know how important a figure he was. 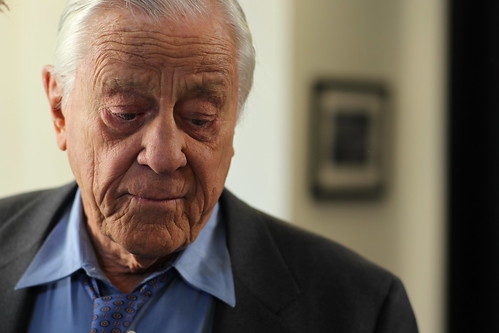 For those of you who only read about that time in history class (or worse, those of you who haven’t), Mr. Bradlee was the editor of The Washington Post during Watergate and he was the man who allowed the investigation and reporting of a break in at the Democratic headquarters (located in the Watergate complex) to go on even though everyone thought it was, in the words of the White House press secretary, a “third-rate burglary.”

Why should you care?  Let’s begin with something from the obituary his paper ran:

From the moment he took over The Post newsroom in 1965, Mr. Bradlee sought to create an important newspaper that would go far beyond the traditional model of a metropolitan daily. He achieved that goal by combining compelling news stories based on aggressive reporting with engaging feature pieces of a kind previously associated with the best magazines. His charm and gift for leadership helped him hire and inspire a talented staff and eventually made him the most celebrated newspaper editor of his era.

Let me add something to that to put it in perspective.  The August Harris Poll found that 76% of U.S. adults surveyed believe that celebrity gossip and scandal stories receive too much coverage, while 49% believe that entertainment news in general gets too much attention.  The kind of journalism practiced by the Post in the Bradlee era is almost dead, having given way to partisan bickering, “advertorials”, and reprinted press releases.  The real lesson for all of us in business is the last sentence I quoted: leadership.

It is very easy in the realities of business to take the easy road.  It’s easy to let a local robbery story go when the pressures to do so from your management, your advertisers, and the Executive Branch of the government are telling you to do so.  Bradlee didn’t, nor did he when he decided to print stories based on the Pentagon Papers, a secret Pentagon history of the Vietnam War.  That is leadership – doing what is right, setting standards, and inspiring those who work with you to do so as well.

“People have got to know whether or not their President is a crook. Well, I’m not a crook.”  It might have been at that moment that the notion of trusting one’s president and government fell apart forever.  Ben Bradlee and his commitment to excellence and the truth, even if the face of his own doubts and fears, opened our eyes.  The business standards he lived by are mostly gone now in his field which is a damn shame.  Maybe we can all work a little harder to keep them in our own?