It’s Foodie Friday and today’s topic is an article I came across about something a restaurant chain is doing that I think is a fantastic idea. I’ll admit that I’m an old-school kind of a guy. When I go out to eat with family, friends, or business associates, I like to interact with them. You know: eye contact, conversation, a few laughs, that sort of thing. 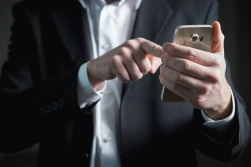 That was the norm until about a dozen years ago when suddenly, everyone got smartphones. All of a sudden the table looked like the reading room at a library. Not a lot of talk and everyone with their heads down reading their phones. I hate it, especially since I generally keep my phone off the table and in a pocket when I’m drinking or dining with others. I figure if it’s an emergency, someone will call me. Responding to an email can wait a few minutes while I finish my meal and my conversation. And trust me – the intense argument on Facebook isn’t worth your time or attention.

What this restaurant chain is doing is simple and smart:

The lack of communication among its diners has prompted British restaurant chain Frankie & Benny’s to offer free meals for kids if families give up their phones when they enter the restaurant. The Italian-American restaurant…came up with the idea after examining the results of a survey it conducted about the way adults use their smartphones. After questioning 1,500 parents and children, the results revealed that around 10 percent of kids had at some point hidden their mom or dad’s handset in a bid to get their full attention. More than 70 percent of the children surveyed said they wished their parents would spend less time fiddling about on their phone, while about the same figure said it felt as if their parents preferred to be on their phone than with them.

Sad that it’s come to that but I often feel just like one of those kids. There is a broader point to be made as well. Walk into most meetings these days and one or more of the “participants” isn’t really participating because they’re preoccupied with their phone. Frankly, I’m a fan of turning phones to silent during a meeting and keeping them out of sight. If what’s going on in the room isn’t more important than what’s happening on your phone then either the meeting never should have happened or you shouldn’t be there.

I guess I have a love/hate relationship with my smartphone. I love that almost all the world’s information is right there and that I can communicate no matter where I am (I still remember running around NYC trying to find a working pay phone during a business emergency). I hate the fact that we respond like Pavlov’s dog to a beep or a buzz. I despise that we’re far less connected during our interactions even as we have the ability to be constantly connected. I didn’t like the fact that as the host I had to ask all the kids to put their phones away while the family was eating, at least for 10 or 15 minutes. You would have thought I had asked them to eat turnips.

Try putting down the phone in social situations and see if the quality of those situations doesn’t improve. Try it in meetings too. What do you have to lose?

One response to “Put It Away!”