The passing of Muhammad Ali happened over the weekend. Another one of my boyhood idols gone, except this one was also a hero well into my later years. Those of you who know me in the offline world know that I’m rarely speechless but when I met Ali for the first time I found myself unable to utter even a single word for a few minutes. I was working at ABC Sports at the time and we had done a deal with Ali to license his name to a clothing line. He came to the office and the photo you see is the one he signed for me. I can still feel the man’s overwhelming aura. 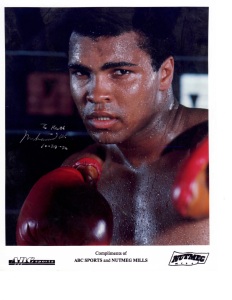 Like most young sports fans of the late 60’s and early 70’s, I grew up watching Ali fight on free TV. I also watched as he stood up for his beliefs even at the expense of his career. We can argue about the Vietnam war or Ali’s commitment to nonviolence (odd for a boxer, perhaps) but there is no arguing about the man’s deeply held beliefs and his influence on society. The man was an artist in every sense and his legacy can be seen in nearly every modern athlete’s training and swagger.

I met Ali for the second time a few years later when I was at CBS Sports. Ali decided he wanted to come to the Final Four and even though he was now very visibly suffering from Parkinson’s, the brightness in his eyes hadn’t dimmed a bit. He hadn’t fought in a very long time and yet walking him through the dome where the games were taking place was like walking with Moses through the Red Sea. The crowd parted as “Ali, Ali” was whispered everywhere. I have walked through crowds with many other famous people.  No response was anything like the palpable adoration I felt the people had for Ali that evening.

Others have written about his influence on society as well as the large number of humanitarian acts he performed. I’d just like to add two things – what he taught me and what I think any business can learn from him. I learned when it’s wrong to keep quiet from him. Ali risked his name and his freedom to do what he felt was the right thing.  When he was vindicated, he continued his career but also continued to speak out and to do good works, not letting the adversity which had robbed him of the prime of his career to diminish his drive to be the best both in the ring and outside of it.  The final struggle of his life, Parkinson’s, which lasted for the last three decades also didn’t diminish his presence in the world nor his desire to help his fellow-man.

How many of us in business think the way Ali did?  How many of us speak up when we see wrongdoing?  How many of us use the bully pulpit of our business to change the world in a positive way for all of humanity and not just for our shareholders?  I’m quite aware that we have a responsibility to those shareholders but we also have a responsibility to our planet and the people who inhabit it, don’t we?   Maybe Ali’s memory can serve to inspire us to fulfill that responsibility.  He was the best in his business, winning the heavyweight title three times, but he was also the best in so many other ways.

Thanks, Champ.  You’ll be missed.

Filed under Growing up, Thinking Aloud, What's Going On